What is home automation and how does it work?

Home automation is the ability to control appliances in your home via a mobile device from anywhere in the world. The term is often used in isolation for devices with programming options, such as thermostats and lawn sprayers, but in fact it describes homes where almost every device is subject to remote control – lights, appliances, sockets, air conditioning systems and so on. From the point of view of home security, this may include alarms, door locks, windows, smoke detectors, security cameras and all kinds of sensors used for security and surveillance. 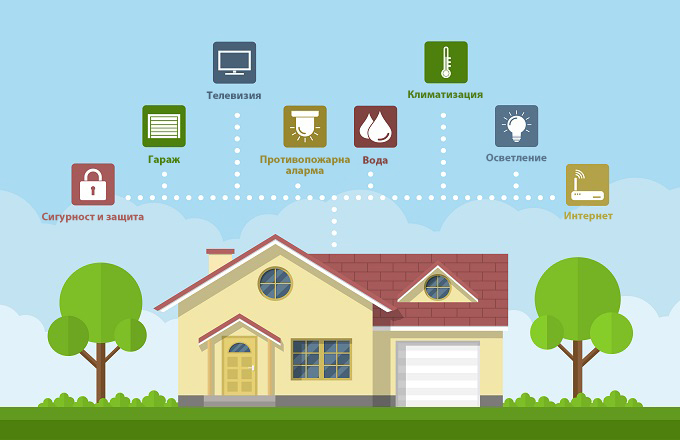 Stages in the development of home automation

Until recently, systems covering entire rooms with the option of centralized automatic control could only be found in industry or in luxury private homes. Typically, these systems covered only lights and air conditioners, and opportunities beyond these basic monitoring and control functions were extremely rare or limited to one place in the building from which it was possible to do so.

In this sense, it can be considered that home automation is not a revolutionary step, but such is the recent opportunity to connect all components of the home to a network, with its own IP address, which can be accessed and managed from anywhere using the internet. This is often called the Internet of Things.

Devices that take advantage of this feature are known as “smart” or “smart” devices. They can be connected to the Internet via an internal network or Wi-Fi. Apart from them, however, even ordinary electrical systems, such as lighting and air conditioners, also integrate well into home automation systems. Some companies are even starting to develop an IP-based inventory of everything in the home. And while there are still no options to find your winter jacket with this technology, home systems are constantly evolving and include more and more devices with each passing day. Soon we will consider it quite normal to send voice commands to household appliances and systems. For example, we can say: The air conditioner should be turned on at 5 pm at a temperature of 21 degrees and maintain it constantly until 6 am the next day.

What does automation really mean?

Automation, of course, is the foundation of the concept of home automation. This term refers to the ability to program and schedule certain actions by devices on the network. This may include time commands, such as turning lights on and off at certain times of the day. It is also possible to program actions that are independent of time, and from the occurrence of an event – for example, to turn off all the lights in the house when the alarm is triggered.

Once you enter the depths of the possibilities offered by home automation, you can unleash your imagination and come up with all sorts of creative solutions to improve and facilitate your daily life. For example, does the west window shed too much light on your home? No problem – plug your electric blinds into the system and set them to close at noon. Or – in the summer the heat in your apartment becomes unbearable? OK – set the air conditioner to turn on the moment you finish work and you will arrive in a pleasantly cool home.

The other main feature of home automation is, of course, remote access and control. Remote control is not new, but before the era of smartphones and tablets, it was limited and not very flexible. Smart devices are changing the way this technology works and revealing incredible horizons to the user, giving him virtually unlimited control over all devices and systems with Internet access.

Monitoring applications offer an incredible amount of information about your home, including a detailed history of events that took place while you were away. You can check the status of your security system, whether the lights are on, whether the doors are locked, whether your stove is working and so on. If you also have surveillance cameras, you could even get a real-time picture and literally see what’s going on in and around your home at any given time.

Even the simplest notifications can be used for things that are important to you. For example, you could program the system to send you a text message or email every time security sensors detect a potential problem, such as extremely strong winds, a fire alarm, or motion detection. You may receive notifications of even smaller daily events, such as that the front door was open when your children came home from school, and that your home has become too cold because the temperature has dropped below a certain degree. This may be a signal that it is time to turn on the air conditioner.

And yet, what exactly “things” can be included in this type of system? Ideally, anything could be included in it. In real life, however, (that is, far from the laboratories and ultra-expensive homes of Hollywood) home automation usually affects standard binary devices, ie devices with only two modes of operation – “works” / “does not work” such as lighting, windows, doors , as well as electrical outlets or heating and cooling systems.

In fact, the part where automation really gets “smart” comes with Internet-connected devices that plug in and control it. The classic device is the home computer, which was at the heart of all early such systems. Nowadays, programming and control are divided between user panels located in the home and applications designed for computer, tablet or phone.

Electronics manufacturers offer a huge range of “smart” devices, many of which have a wide range of innovative options, but not all allow for the integration of the applications mentioned above. Much of the problem comes from differences in manufacturers’ views on how these devices should be connected to the network. That is, be careful when buying “smart” appliances, as it may be that your smart TV, washing machine, coffee maker, air conditioner and refrigerator use their own applications that are incompatible with each other. Eventually, you will still be able to control them remotely, but the whole concept of a unified “ecosystem” is falling apart.

In the near future, home automation is expected to be standardized in order to optimize the user experience.