The secret history of air conditioners

Summer is still in full swing in history and the melting heat is forcing people all over Bulgaria to keep their air conditioning on almost constantly. Of course, we should be grateful that with the push of a button we can save ourselves from the terrible temperatures – think about the situation only a century ago! The innovation that our familiar climate systems bring to people’s lives is not only revolutionary, but also vital at times. But when and how did air conditioners originate and how did they evolve over the years? Let’s find out in the following lines, where we will present a brief history of air conditioning.

The predecessors of modern air conditioners

Evidence of mankind’s attempts to cool down mechanically dates back nearly 2,000 years. One of the earliest structures known to history was invented by the Chinese inventor Ding Huang. He assembled a hand-operated fan designed to inject air indoors. In the 3rd century, a system was developed in Rome to import donkey-loaded ice from local mountain ranges to cool Emperor Elagabalus’ garden. Ordinary Romanians, meanwhile, tried to cool their rooms by running cold water from aqueducts through the walls of their homes. The Chinese continued the evolution of the device invented by Ding Huang, and in the eighth century built a water-powered fan in one of the imperial palaces. During the next Song Dynasty (960 – 1279), fans became extremely popular.

Summer is still in full swing in history and the melting heat is forcing people all over Bulgaria to keep their air conditioning on almost constantly. Of course, we should be grateful that with the push of a button we can save ourselves from the terrible temperatures – think about the situation only a century ago! The innovation that our familiar climate systems bring to people’s lives is not only revolutionary, but also vital at times. But when and how did air conditioners originate and how did they evolve over the years? Let’s find out in the following lines, where we will present a brief history of air conditioning.

The Middle Ages brought significant progress in the development of cooling systems. For the most part, people relied mostly on architecture, building rooms with huge openings on the outside so that a current was formed and at the same time as little sunlight as possible entered. Forever in history will remain an experiment related to air conditioning and carried out by the American patriot and inventor Benjamin Franklin. In 1759, he and Professor John Hadley of the University of Cambridge discovered how to freeze water by evaporating alcohol and other volatile liquids on the surface of the water. Decades later, in 1820, the Englishman Michael Faraday achieved similar results by liquefying ammonia.

This period marked intensified efforts in the direction of cooling the air in hospital rooms and other medical premises, which led to the next wave of innovation in this direction. In 1830, John Gore, a Florida physician, decided to study the effects of temperature on the human body, which was related to his observation that there was an epidemic of yellow fever in the south and almost no disease in the north. He succeeded in devising a cooling system that passed airflow through an ice bucket made by an ice machine, and even succeeded in patenting his invention in 1851. Unfortunately, some ice makers decided that the new technology could undermine their business and allied themselves in a common mission against it, effectively cutting off the project. However, Dr. Gori remains in history as one of the earliest figures in this direction. 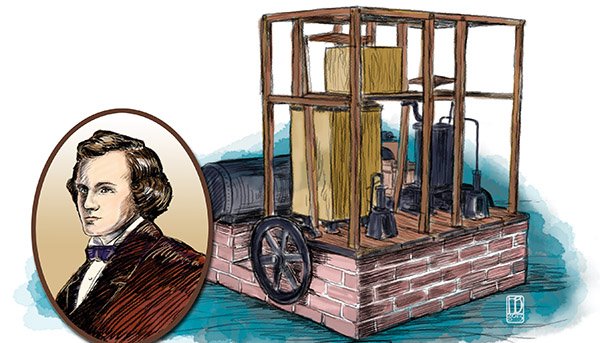 Another case from the same period arose after a tragic accident. On July 2, 1881, US President James Garfield was assassinated and died nearly two months later, in September of that year. To alleviate his situation, engineers from the US military built a cooling facility that blew hot air through wet textiles, pushing the cold air down to the patient. Although this worked as an idea, it cannot be said to be a particularly sustainable or efficient air conditioning system, as more than 680,000 kilograms of ice were consumed in two months.

Although air cooling was the focus of early air conditioners, there was another problem that was not addressed until the end of the 19th century – humidity. Combined with high temperatures, too high a content of water vapor in the air not only created discomfort for people, but also hindered a number of industrial processes, such as printing and paper production.

At the beginning of the 20th century, a young engineer from Buffalo, Willis Carrier, was assigned a special task by the Saket-Wilhelms Lithography & Publishing Company in Brooklyn. The company was often confronted with poorly dried ink and wrinkled paper, and the general opinion was that air conditioning could solve some of these problems. In 1902, Carrier came up with an extremely successful idea while waiting at a foggy train station in Pittsburgh. The idea was that humidity control could be achieved by passing air through water to create fog, thus removing excess water from the air. Career tested his theory in a room used for commercial purposes and succeeded. He later received a patent for his invention, in the name of the company in which he was an employee – Buffalo Forge Company. The air was air-conditioned by passing it through a series of zigzag divider panels. The outflow of the liquid was caused by the inertial force of the air pushed by the fans through a film placed in the separation plates. In 1915, Career continued his career, leaving the company he worked for and founding another, the Career Engineering Company. The company had a mission to develop better and better air conditioning equipment – from industrial air conditioners for huge production facilities to small cinemas. It is rumored that Carrier helped the film industry a lot during the difficult summer seasons by installing air conditioning in the Rivoli Theater in Times Square in 1925 and taking the lead in cooling cinemas and significantly improving the comfort of spectators.

But his merits did not go so far – Career is at the heart of some of the most serious innovations in the world of air conditioning. By the end of 1911, he had already developed what would later become known as the Rational Physiometric Formula, which he shared with the American Society of Engineers and became the foundation for making calculations about the air conditioning of history. Another of his inventions, a history from 1922, allows a drastic reduction in the size of the facility. His patents have a huge impact on a number of production operations and significantly improve working conditions in factories, plants, hospitals and more. IN
The United States is taking the nation by storm – while in 1965 (15 years after Carrier’s death) only 10 percent of American households had air conditioning, in 2007 the figure rose to a staggering 87 percent!

The development of climate technology continues, and in recent years the focus of manufacturers has been central to the problem of electricity consumption. Statistics show that air conditioning has certainly become firmly entrenched in the daily lives of almost all households in developed countries, and people have become accustomed to the convenience of controlling the temperature around them. In developing countries, air conditioners are also seeing sales. With the growing consumption of energy from history – air conditioners comes the realization that the use of ultra-energy-saving air conditioners is vital for environmental protection.