Mitsubishi Heavy Industries (MHI) has developed two new series of wall-mounted split systems for the European market, production and marketing of which began in late 2016. The new series – the highest class “Diamond” SRK-ZSX and class “Premium” SRK-ZS include a total of 9 models. In addition to their advanced features and energy-saving features, both series feature a unique design that blends beautifully with any interior.

The design is the work of the Italian industrial design studio Tensa srl based in Milan, and was created to meet a wide range of European design requirements, thanks to the rounded contours and sophisticated design features. In addition to the nine usual models, two limited series of color options are in preparation. Also, by using computational fluid dynamics (CFD), which is commonly used to design the blades of aircraft engines, the structure, and shape of both the fan and the heat exchanger are optimized. 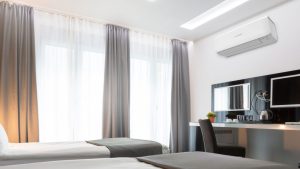 Both series are designed to provide significantly greater comfort and energy savings. The use of CFD (Computational Fluid Dynamics) in the design of the fan blades has resulted in a reduction in operating noise to only 19 decibels (dB) (A) in “silent” mode. The implementation of the MHI double-rotor compressor in the entire ZSX series, in combination with the improved vector control, allows optimal control of the compressor motor and provides even higher efficiency in the entire range. As a result, the ZSX models achieve extremely high energy efficiency and are rated with the highest energy rating for Europe “EUEnergy Label” A +++ both in cooling and in heating mode. In addition, all models of the “Diamond” series are equipped with motion sensors that detect the movement of people in the room and automatically control the room temperature, as well as the ON / OFF mode of the air conditioner.

Also, all models have a quiet mode “silent” on the external unit and a weekly timer function for greater convenience. It is possible to connect them to all available on the market Wi-Fi adapters and control via smartphones and more.

In addition, MHI plans to implement their energy-saving heat pump technologies and cutting-edge European design to provide products that meet the needs of the market, contributing to a low-carbon environment.

The “Premium” SRK-ZS series models are already available on our market, while the production of the “Diamond” SRK-ZSX series starts later this year.